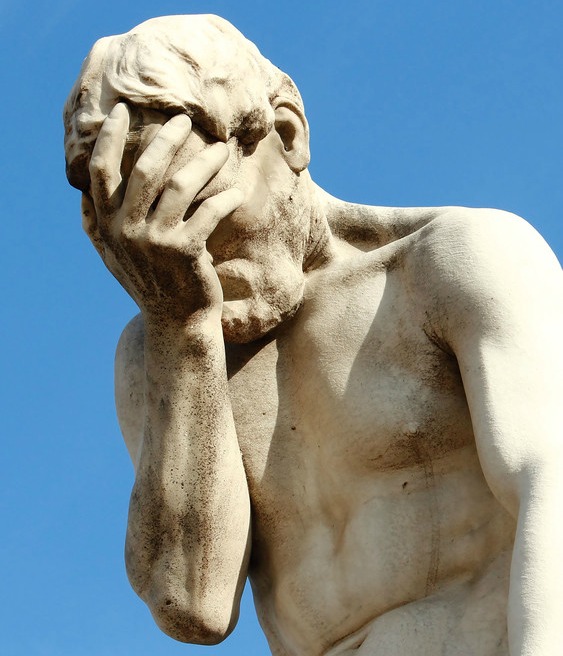 Last Wednesday morning on his Newstalk Radio show, Pat Kenny had his weekly science slot with resident expert Luke O’Neill, Professor of Biochemistry and Academic Director of the Biomedical Sciences Institute at Trinity College Dublin. The chosen topic for discussion was genes, intelligence and the education system. (It begins at 31 minutes into this podcast).

The discussion was littered from start to finish with misrepresentations and misinterpretations. Given Professor O’Neill’s stature as an internationally renowned immunologist who has done a great deal to make science accessible to the general public, we were very disappointed that he was so casual about his remarks and that he had so little understanding of the science behind the topic he had chosen to present. In our last post, we discussed the application that Kenny and O’Neill saw for this study within our education system. Here, we look at the “science” upon which their conclusions were based.

For his opening remarks, Prof O’Neill stated “You’re born with a particular set of genes that sort of govern intelligence to some extent. And a big study just came out. 10,000 twins were assessed, which is a good group to look at ‘cos identical twins who are separated at birth and you can follow them in schools and so on and it’s 60% genes and 40% environment is what governs your ultimate intelligence. And for some subjects like maths it’s 70% genetic. So no amount of schooling, almost, is going to help someone who doesn’t have the genes to be mathematical.”

In 1994, Robert Plomin, Professor of Behavioural Genetics at King’s College London, began the Twins Early Development Study (TEDS), a longitudinal study of all twins born in England and Wales between 1994 and 1996. They are not all identical and none was separated at birth. In December 2013 an interim study was published, looking at the GCSE results of the twins who have now turned 16:  Strong Genetic Influence on a UK Nationwide Test of Educational Achievement at the End of Compulsory Education at Age 16. This, we presume, was the subject of Luke and Pat’s discussion.

As stated clearly in the study title, it was looking at GSCE results, or academic achievement rather than intelligence and, to quote Plomin himself, “GCSEs aren’t a great measure of what we would normally call academic intelligence.” So, this wasn’t actually a discussion of intelligence at all, something which is vastly more nuanced and complicated than GCSE grades and IQ scores.  Prof O’Neill casually sidestepped this and then went on to confuse the term heritability with inherited. The two are not the same.

The concept of heritability belongs to the field of genetics and can be quite tricky for a non-expert to get their head around. Heritability is a measure of the extent to which differences in the appearance of a trait within a particular group of people, can be explained by a difference in their genes. It refers to the group, not to the individuals and it does not refer to the passing down of a trait from parent to child. It is incorrect to say that if intelligence is 0.6 heritable, then 60% of a person’s intelligence is inherited from their parents and 40% is due to the environment. 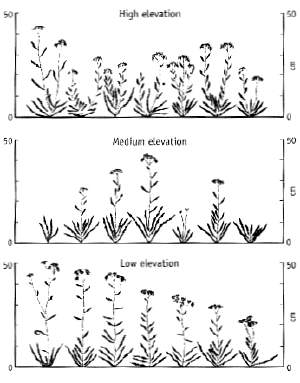 In the 1940’s, scientists Clausen, Keck and Heisey studied the growth of the yarrow plant, Achillea. In one experiment, they took seven Achillea plants and made three clones of each. One of each clone was planted at coastal height, one at mid elevation and one higher still, at the timberline.

In the diagram to the left, the seven clones are ordered from left to right according to their growth at the lowest elevation. The second line shows them in the same order at middle elevation and the top line shows them at the highest elevation, the timberline. The three clones of each plant are shown directly one above the other.

Comparing the clones of the same plant vertically across the three different environments, although each is genetically identical, their growth is very different. The difference in height cannot be explained by any difference in their genes, therefore height is almost 0% heritable.

Now compare the seven different plants at each elevation (horizontally). Here, the environment is the same for all the plants, so the difference can only be explained by the difference in their genes. The very same trait, height, is almost 100% heritable in this scenario.

So, you cannot take the heritability of a trait as measured in a particular group of people in a particular setting and then apply the result to any old group of people you fancy and in any environment. Bear in mind also, that it is unlikely in the extreme that maths ability, or any other ability, is controlled by one or two genes. So, to extrapolate the results of Plomin’s study to say that anyone is born with the “wrong genes” for maths or any other subject, and that no matter how hard they work at it, they are wasting their time, is absolute nonsense.

It is this sort of misunderstanding that leads to the fixed mindset that prevents too many of us from trying new things or persisting in the face of difficulty. We may not all have the potential to be geniuses, but given the right “environment” and the right attitude, any of us can be perfectly competent at far more than we might think. It is a great disservice to our children to lead them to believe that they will never be good at something because they were born with the wrong genes. 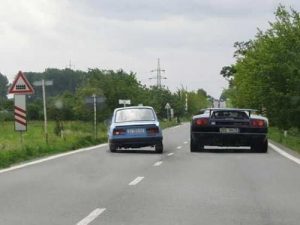