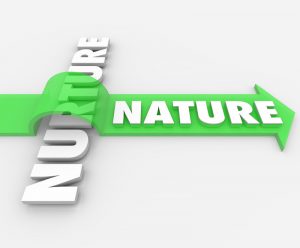 Part 1: An outline of the models. Part 2 will be my own analysis.

Ask ten experts for a definition of “gifted” and you’re likely to get eleven different answers. It seems that no one can pin it down. Which doesn’t help us much in our quest for support for gifted students. We’re not off to a great start when we can’t even explain clearly what we are talking about!

Broadly speaking, it seems we have two concepts of giftedness: a. Gifted as child development and b. Gifted as talent development/achievement. These almost divide along the lines of nature vs nurture in which the nature side says that gifted children are born with different wiring and undergo asynchronous development; gifted is who you are. The nurture side says we are all born with pretty much the same potential and, with the right environment, almost anyone can become gifted; gifted is what you do.

First, let’s look at the concept of giftedness as a difference in child development, the psychologist’s viewpoint:

But hold on, it’s not as simple as that! They process information differently, often seeing the bigger picture very quickly and appreciating depth and complexity beyond what would be expected for their age. It is also a widely held view that gifted children have a higher likelihood of having several of the over-excitabilities as  described by Dabrowski. They experience the world around them differently and more intensely than others.

You cannot separate out the emotional, intellectual and physical into distinct parts of a child’s development. They are all intertwined. So, while a gifted six year old may have the intellectual ability of an average twelve year old, they do not have the emotional capacity of an average six year old. They perceive and process the world around them differently to the average child, but they are only six, with the life experience of a six year old. It’s all quite complicated!

In Asynchrony: A New Definition of Giftedness, Linda Silverman  describes it as “ being out-of-sync within oneself (uneven development), out-of-sync with age mates and the expectations of the classroom, having heightened emotions and awareness, and being vulnerable, due to all of these developmental and psychological differences from the norm.” The Columbus Group came up with this definition of giftedness back in 1991:

“Giftedness is asynchronous development in which advanced cognitive abilities and heightened intensity combine to create inner experiences and awareness that are qualitatively different from the norm. This asynchrony increases with higher intellectual capacity. The uniqueness of the gifted renders them particularly vulnerable and requires modifications in parenting, teaching, and counseling in order for them to develop optimally.”

Stephanie Tolan, in Giftedness As Asynchronous Development,  describes how, no matter how we come at it, we inevitably use the externals, performance and achievement, to identify giftedness and to measure it. We then tend to go on to use these external measurements to define the child, so that achievement becomes giftedness. However, she maintains that giftedness is an internal reality and that achievement is merely an expression of it. “Whether or not it finds expression in achievement or unusual performance, the internal difference remains…When we focus only on what gifted children can do rather than on who they are, we ignore vital aspects of their developing selves and risk stunting their growth and muddying or distorting their sense of themselves and their worth”.

Now to the concept of gifted as achievement, the educationist’s viewpoint:

This concept maintains that giftedness is all about talent and its expression. Identification is centred on identifying talent by means of rating scales, checklists, tests, portfolios or auditions. A recent position statement from the National Association for Gifted Children (NAGC) in the US, defined giftedness as follows:

“Gifted individuals are those who demonstrate outstanding levels of aptitude (defined as an exceptional ability to reason and learn) or competence (documented performance or achievement in top 10% or rarer) in one or more domains. Domains include any structured area of activity with its own symbol system (e.g., mathematics, music, language) and/or set of sensorimotor skills (e.g., painting, dance, sports).”

This view is further described by John Feldhusen in Talent Development in Gifted Education. In summary: “The ultimate goal of talent recognition and development is to help students understand their own talent strengths and potentials, to know how to pursue and engage in the best talent development activities, and to commit themselves to the development of their talents”

In Rethinking Giftedness and Gifted Education by Subotnik, Olszewski-Kubilius and Worrell,  it is stated in conclusion that “Eminence should be the goal of gifted education”

In the UK, they also seem to be heading down the talent development road, with the NAGC/UK having recently rebranded itself as Potential Plus UK . It is all about support for children with “high learning potential”, although they do continue to recognise and address the unique social and emotional issues.

In Ireland, where the needs of gifted children are barely recognised at all, any model at all would be a good start!