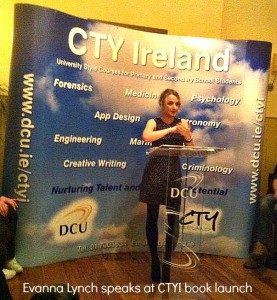 There was great excitement at CTYI/DCU last Saturday evening for the launch of Words To Tie To Bricks, an anthology of works by the students of the creative writing class of Summer 2013. Not only were these teenagers there to see their work published in print, the book was to be launched by CTYI alumna, Evanna Lynch, aka Luna Lovegood of Harry Potter fame.

The highlight of the evening was Evanna’s speech. Having begun by saying she was no good at public speaking, she went on to deliver a wonderful message to the young people in the audience and one which merits sharing further.

Reading the book which she had been invited to launch, she was struck by the depth of the subject matter and the intensity of emotions expressed. As had been remarked by previous speakers, it was hard to believe the authors are so young. Then she remembered back to when she herself was that age, attending CTYI and beginning her acting career with the Harry Potter films. She too used to write, although she claims she rarely finished anything! People frequently remarked that she was too young to be writing what she wrote, too young to be acting; always too young for what she was doing, feeling or thinking. After a while, she began to feel as though she was wrong to be doing these things at all and felt somehow uncomfortable about it.

Now, in her early twenties, the message has become “you should be doing this” and “you should be doing that.” She is suddenly no longer considered too young to have such talent, but is expected to challenge herself and achieve more. Looking back, she says the constant message that she was too young was, in a way, quite damaging. It made her question herself and her ability and it prevented her from really enjoying doing what she loved.

Her message to young people is not to pay too much attention to those who tell you that you are too young. If you have a talent and you enjoy using it and developing it, then embrace it, be proud of it and really enjoy it now.

This is no ordinary book of poems and prose written by a bunch of teens, It is really well-written and a pleasure to read. If in doubt, take a look inside. Not alone that, but all proceeds go to St Michael’s House,  who provide vital community-based services for people with intellectual disability. What a wonderful way for the students of CTYI to use their talent. Please support them and St Michael’s House by buying a copy of the book. You will find links to all versions here, so no excuses! 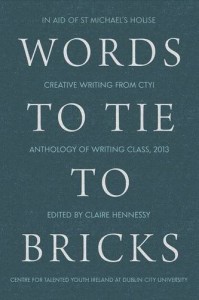